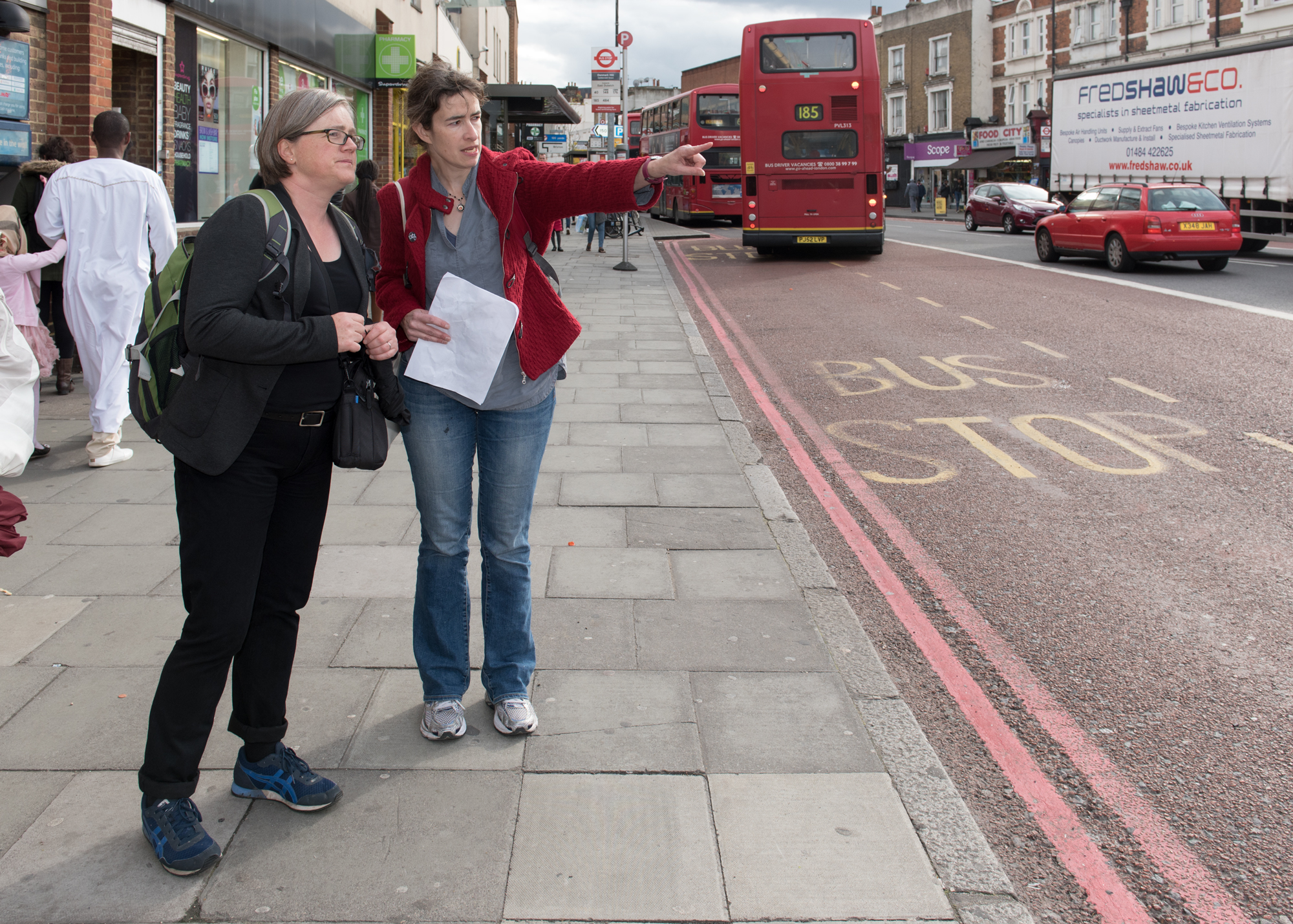 Transport for London has published plans for changes to the junction at Camberwell Green. Full details and drawings can be found here.

Some of the proposals are genuinely useful. Much needed changes include: a new pedestrian crossing between Camberwell Passage and the Green, and the repositioning of the St Giles bus stop, setting it a few metres back from Vicarage Grove, to improve sight-lines.

But the plans offer far too little to improve safety.

Camberwell Green is a dangerous place to walk or cycle.  In January 2014, Julianah Omolara Awokoya was hit by a car as she crossed the road by Macdonalds. She died of her injuries. In May 2015, Esther Hartsilver was killed by an HGV as it turned left into Orpheus Street.

At the inquest into Esther Hartsilver's death, the vehicle’s professional driver stated that junctions forcing high volumes of traffic to turn across cyclists are “just an accident waiting to happen”. The designs for Camberwell Green do not remove the danger of vehicles turning left across people on foot or on bikes, and actually encourage cyclists to put themselves in this dangerous position.

At the moment, if you need to change buses at Camberwell, you may have to wait at four separate crossings to get from one side of the junction to the other. These staggered crossings are frustrating and particularly problematic for people with disabilities. The central pedestrian islands often become crowded and are difficult to manoeuvre when using a wheelchair or a buggy. People waiting for a long time at this complicated junction are more tempted to cross against the lights, or to cross in the middle of the road.

Why not create diagonal pedestrian crossings that go straight over the centre of the junction? (There are examples of this at Oxford Circus and at the junction of Townley Road and East Dulwich Road.) This is a town centre and bus interchange - it should be easy to move between shops and bus stops.

At greater risk from turning drivers

What's more, there’s very little to make it safer to cycle through the junction. As Southwark Cyclists point out: 'Tfl’s proposal for improving cyclist safety consists of:

Advanced stop lines might look like space reserved for cyclists but they are only helpful if you arrive at the junction at exactly the right moment. They provide an incentive for filtering up the inside of queuing motor traffic, potentially into a dangerous position when it starts moving – and turning left.

There are four lanes for traffic heading north towards the Walworth Road - isn't there room for a protected cycle lane?

Altogether, the design of the junction emphasises that motor traffic comes first for Transport for London.

On a visit to Camberwell, the London Assembly Member and Green Party Transport spokesperson Caroline Russell was shocked to see people trying to cross between fast-moving buses and cars on Denmark Hill at the junction with Love Walk. She said: ‘This spot is crying out for a new crossing.’

Where has the plan for a Love Walk crossing gone? It was proposed in the 2011 plans for Camberwell's regeneration, and was on the 2015 plans too.

Council and TfL must work together

After the inquest into the death of Esther Hartsilver, the coroner wrote in her 'Report to Prevent Future Deaths': 'I write this report to ask that the experts in TfL and the London Borough of Southwark come together (with the assistance of the police) to explore what can be done to reduce the risk to all vulnerable road users at this junction.'

Southwark Council and Transport for London have been blaming each other for delays in making this junction safer. It's time they worked together - producing an interim solution that actually improves safety not worsens it.

Local campaigner Eleanor Margolies is calling for real and immediate improvements to the junction so it’s easier for people to get around and no longer dangerous to cross. She says:

‘Older people, families, anyone changing buses, using local shops or on their way to King’s – we all need to be able to cross safely at Camberwell. I’ll be pushing for a new crossing of Denmark Hill at the junction with Love Walk. And I’ll ask Transport for London to consider diagonal pedestrian crossings, like the ones at Oxford Circus.’

Please respond to TfL's consultation with your thoughts - it's a simple form with one box to complete. The deadline is Sunday 3 September.