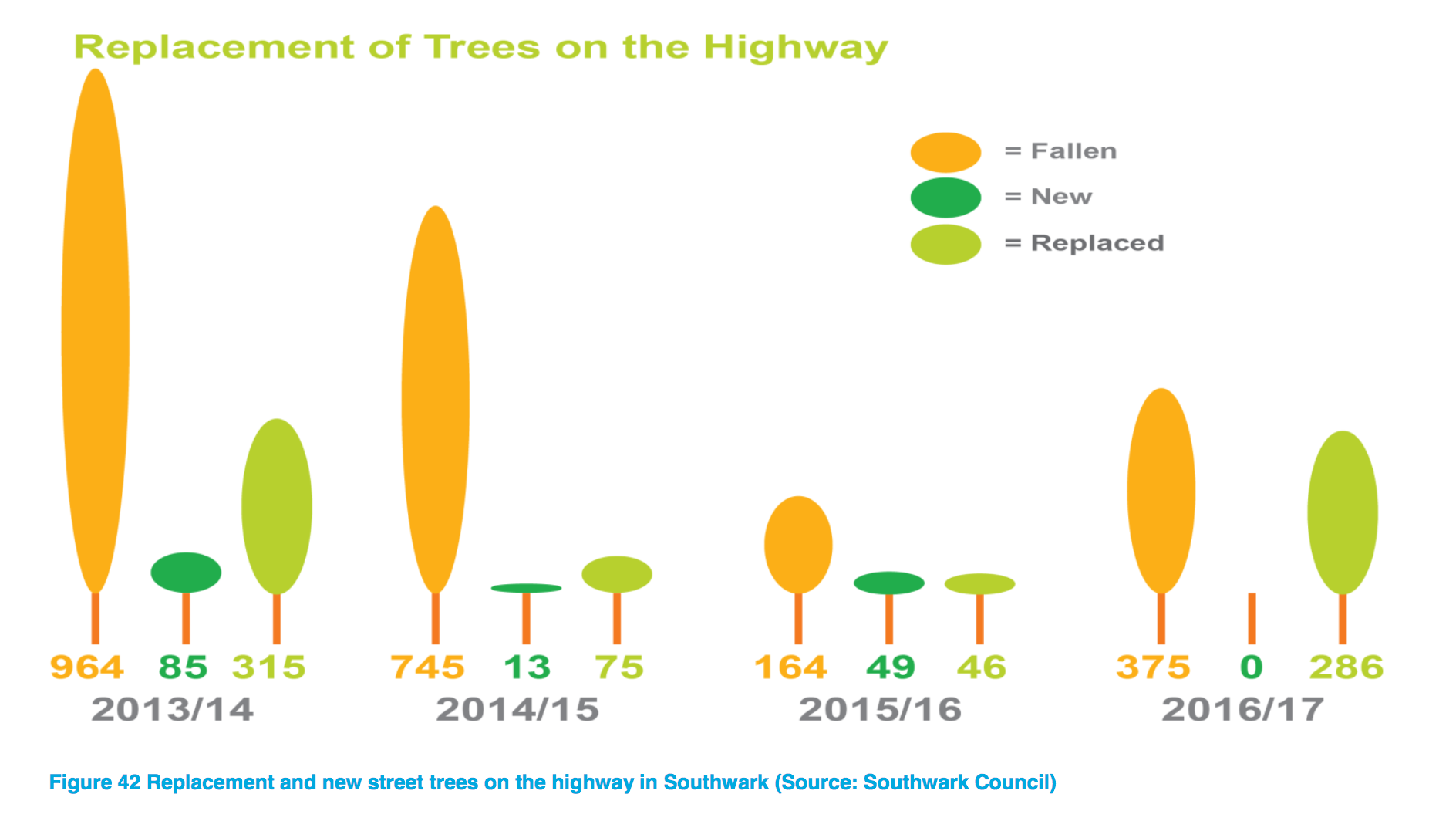 We would make sure all these lost trees are replaced, and plant new trees to absorb carbon and clean particulate pollution from the air. By replacing a car parking space with trees, cycle parking and parklets using Sustainable Urban Drainage principles, we would both improve the air locally, offset emissions and adapt to higher rainfall, reducing the risk of flash flooding.

We'd radically improve conditions for walking and cycling for people of all ages and abilities. We would do this by making streets accessible to cars but not convenient as short-cuts. We’ve seen this work in Walthamstow, where traffic levels fell by 56%.

We’d create bus and cycle ‘gates’ that make taking the bus faster than taking a car or Uber. This would be useful on the Walworth Road, by Blue Anchor Library, and on Thurlow St. The council could ask TfL to do this on streets controlled by TfL, like Borough High St and on Duke St Hill by London Bridge.

We would deliver a cycling network that meets Londonwide quality standards by 2025 and create Low Traffic Neighbourhoods across the borough to prioritise walking. 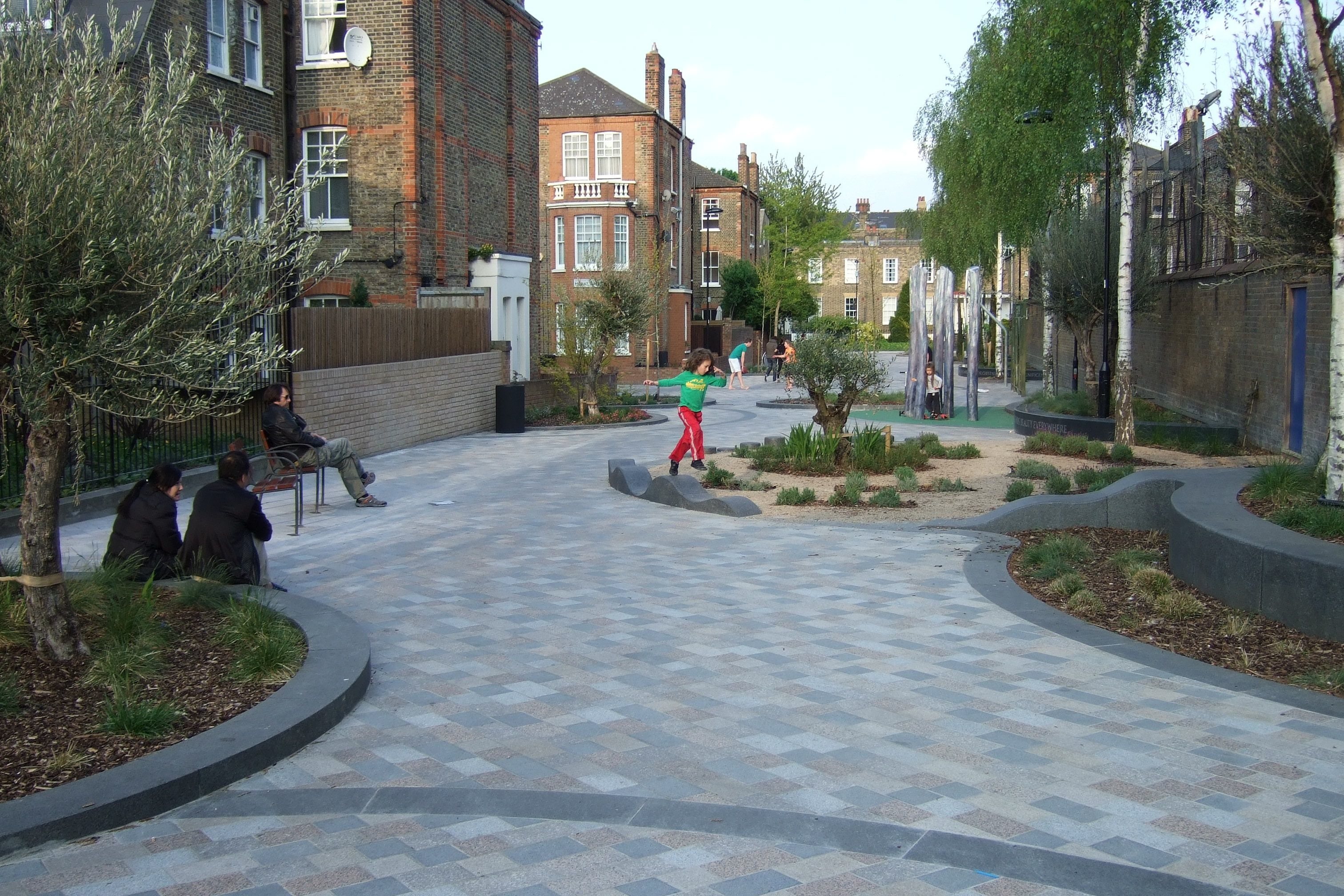 We propose a rush hour ban on loading/unloading for combustion engine vehicles to reduce peak hour congestion and encourage use of zero-carbon freight cycles. We’d support freight cycle services by providing micro consolidation hubs. Team London Bridge are helping businesses based in their area to find cargo bike services that suit them. Cargo bikes take up less space than vans and offer more reliable journey times, as well as putting out zero emissions.

At the moment there’s a confusing range of ‘click and collect’ services. We’d produce an interactive map of the best places to pick up parcels rather than getting them delivered to work or home.

Southwark has fewer Controlled Parking Zones than most other London boroughs. We think CPZs are a good way to reduce the dominance of our streets by parked cars, to help ensure car owners can park nearer home, and to discourage the most polluting vehicles.

A small but emblematic action: while parking places are needed near shops, why does Southwark Council offer private car-owners a Christmas bonus with free parking on shopping parades? Instead, we'd encourage everyone to shop local with incentives for walking and cycling, like free cargo bike deliveries along the lines of the Waltham Forest Christmas Courier.

We need investment to help people choose an alternative to the private car. We would roll out the TfL Cycle Hire scheme to include the whole area within the Overground in Southwark (i.e. including Peckham Rye, Denmark Hill & Rotherhithe) by 2022. We’d work with companies providing e-bikes and e-cars for whole borough.

We support the idea of TfL taking control of south London railway lines to improve reliability and quality of the service. And we need big improvements to key stations like Peckham Rye that still shamefully have no step-free access. Denmark Hill has more passengers per day passing through it than Nottingham – and is dangerously overcrowded at peak times.

Buses, vans and cars travelling at lower speeds takes less energy, and improves safety for pedestrians. We’d make the council fleet of vans and cars, as well as their subcontractors,  use Intelligent Speed Adaptation. We’d push for it to be rolled out on local buses by TfL too.

It’s hard to know how we’re doing as a borough, with figures buried in official reports. So we’d create a live digital dashboard showing annual reductions in emissions and daily progress in getting people travelling actively - like a smart meter for Southwark transport. How many people are cycling down the Walworth Road today? How many delivery companies have changed to electric or pedal power? We'd talk to neighbours and community groups from early on about their ideas for the methods and locations for measures to reduce traffic and air pollution. We'd test out ideas using temporary, colourful materials – try it out with straw bales and paint for a month before installing concrete slabs!

How will we pay for it?

Getting drivers to pay a fairer contribution to the costs they impose on us all will encourage other forms of travel. All the money raised from parking charges has to be spent on transport improvements, so they help improve other forms of travel.  Consider how much we are paying now to keep things as they are. Asthma alone costs the UK health service at least £1.1 billion each year, with the health service in Southwark particularly badly affected. And there's a heavy human cost too. We can’t carry on with business as usual. It’s killing us.

Other parts of our plan simply involve a redirection of money that Southwark Council already receives from Transport for London.

Some of these ideas might seem a bit off-the-wall – but measures introduced by the London Assembly like the Congestion Charge and the Ultra Low Emission Zone have been established without any of the chaos predicted by some commentators.

We’d love to hear your thoughts.