National Funeral of the Unknown Cyclist

A national cycling and walking protest & Die-In against the Government & Parliament prior to Autumn Budget organised by Stop  Killing Cyclists.

The protest is to condemn all existing and previous government's from all the major parties for their failure to take comprehensive action on safer cycling.

The protest calls for £3 billion/ year to be invested in a national protected cycling network and an end to and reversal of the annual tax cuts for toxic diesel/petrol which is killling tens of thousands of people who walk or cycle every year, disabling hundreds of thousands and damaging our kids lungs for life.

The National Funeral for the Unknown Cyclist will honour and mark the deaths of:

* over a thousand poeple cycling killed on our roads in the last decade
* the thousands of people who cycled killed by traffic pollution
* the hundreds of thousands of peole who wanted to cycle but were afraid to due to lack of protected cycle lanes and who thus died from horrific lung & heart diseases, diabetes and a plethora of other inactivity diseases.

The UK Treasury for decades has invested almost nothing on a national protected safer-cycling network, whilst £100s of billions get spent on ever more roads for the immensely wealthy car-lobby and £billions more given in annual tax-cuts to the toxic diesel/petrol lobby.

We have in the UK among the lowest levels of European cycling investment and the highest levels of childhood obesity.

We need urgent action to address the UKs obesity, climate and pollution emergencies.
Investment in cycling is one of THE best ways to tackled all three. 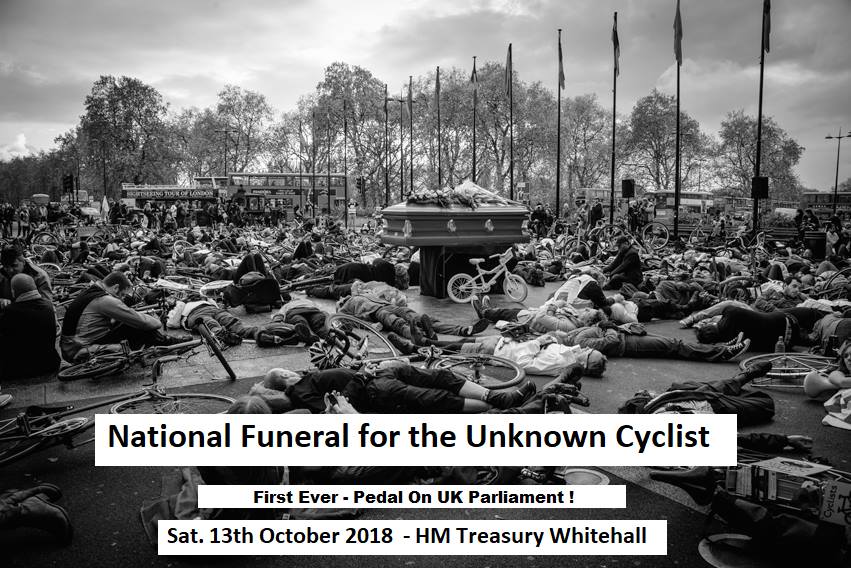