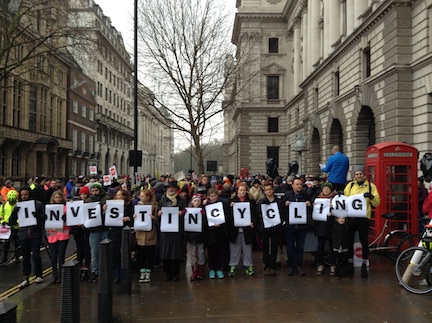 Air pollution causes premature deaths and suffering through diseases such as asthma, lung and heart disease. It has been linked to dementia and diabetes and to permanent stunting of children's lungs, leading to lifelong health problems. Thousands more deaths, reduced quality of life and increased cost to the NHS can be attributed to the diseases of inactivity - diseases that can be tackled by making walking and cycling safe and attractive.

Stop the Killing has called for funding for cycling and walking to rise immediately to 5% of the UK transport budget, rising to 10% of the budget by 2020. The measures they call for include:

1. Fair funding for cycling with £15 billion invested in a National Segregated Cycle Network over the next 5 years.

2. Ban all non-zero emission private cars from cities on days where pollution levels are predicted to rise above EU safety levels.

3. Ban all diesel-powered vehicles in city-centres within 5 years.

4. Ban all fossil-fuel powered vehicles within city centres within 10 years.

The full list of measures and a list of current government policies that are worsening air pollution can be found on stopthekilling.org.uk

What next? Londoners are ahead of their politicians. 81% of respondents to the Mayor's survey in 2016 said they were in favour of a T-charge (T=toxicity) on the most polluting vehicles and this is now due to be implemented in October. But we need more action from both the Mayor and our local councils.

What can I do?

Keep up the pressure - in person, by emailing and tweeting your representatives, and sharing information with friends and family. Sign this petition for the Ultra Low Emissions Zone to be extended to the whole of London.  Protect yourself as far as possible by choosing to walk and cycle and taking lower pollution routes. 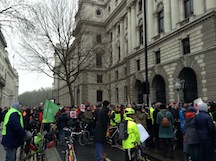