Over 70% of Aylesbury residents initially said ‘no’ to this redevelopment agenda, but Southwark Council then simply ignored their own consultation. Pressure groups and local Green activists have been supporting the refurbishment option all along, which would avoid the social and environmental harm the proposed demolitions will cause. The council provided “inadequate and unbalanced” information to the first inquiry, according to independent academic witness Professor Jane Rendell. At a recent ‘Homes for All’ meeting there was a consensus on “refurbishment not demolition” for the estate. 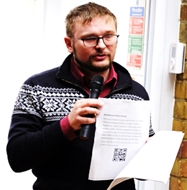 Aylesbury resident Ignas Galvelis said: “Southwark Council’s plans will ‘cleanse’ Aylesbury homeowners out of their own communities altogether, while new housing association homes face rent hikes. Labour-run Southwark Council has failed to represent the interests of local residents, allowing the CPOs favouring developers’ interests to proceed. The Green Party stands with tenants and homeowners protecting our community. That’s why I will stand as a Green Party candidate here in the Southwark Council elections on 3rd May.”