When Greens are in power

In the week that Southwark Housing cabinet member and Labour councillor Leo Pollak resigned from his post, here at Southwark Green Party we have been focusing on more positive news.

Landing in our inbox today was a snapshot of the positive and responsible impact that elected Green Party representatives are having around the country.

Rather than hiding behind anonymous twitter accounts (see Southwark News for details), elected Greens make good things happen for the communities they represent that are also good for the planet. 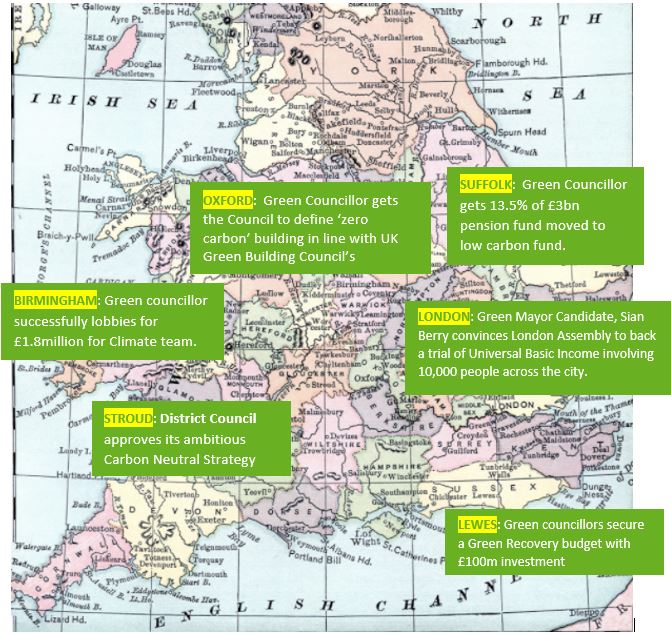 From the dozens of good news from across the country, these caught our attention from recent weeks:

...in Lewes, where Greens hold the balance of power, £100m budget is passed to invest in sustainable council homes, in retrofitting rather than demolition, in renewable energy and in improving the local biodiversity.

...in Stroud, the district council has approved its ambitious Carbon Neutral strategy.

...in Birmingham, Greens successfully lobbied for £1.8m for the council climate team over 2 years.

...in Oxford, Greens got the council to define 'zero carbon' buildings in line with the stringent UK Green Building Council’s framework definition, rather than other 'green washing' descriptions.

...in Suffolk, a Green councillor got 13.5% of the £3bn county council pension fund moved to a low carbon fund which saved the fund £millions when oil stocks nosedived. Closer to home, the same councillor got a 20mph limit agreed for his village after an 11-year campaign.

And, in London, party leader and candidate for London Mayor, Sian Berry has just convinced colleagues at the London Assembly to back a trial of Universal Basic Income involving 10,000 people across the city. Imagine the problems and heartache that UBI would have prevented through the pandemic.

Honest, hardworking and caring politicians. Doing the right thing. Coming to a council chamber near you, very soon. If you want to help make that happen here in Southwark, get in touch.