The Green Party's new co-leaders, Caroline Lucas and Jonathan Bartley, speak to conference after the announcement of their election

Around 15 of us from Southwark Green Party joined more than 1,000 party members from all over England and Wales for the 2016 autumn conference, held at Birmingham University.

The weekend began with the announcement of the results of the party’s leadership elections. Breaking new political ground, the Greens now have two co-leaders: Caroline Lucas, MP for Brighton Pavilion, and Jonathan Bartley, the party’s work and pensions spokesman, who is a Lambeth Green Party member. Re-elected as deputy leader was Amelia Womack, Green Party candidate for Camberwell and Peckham in the 2015 general election. Amelia, 31, is the youngest deputy leader of any UK political party. 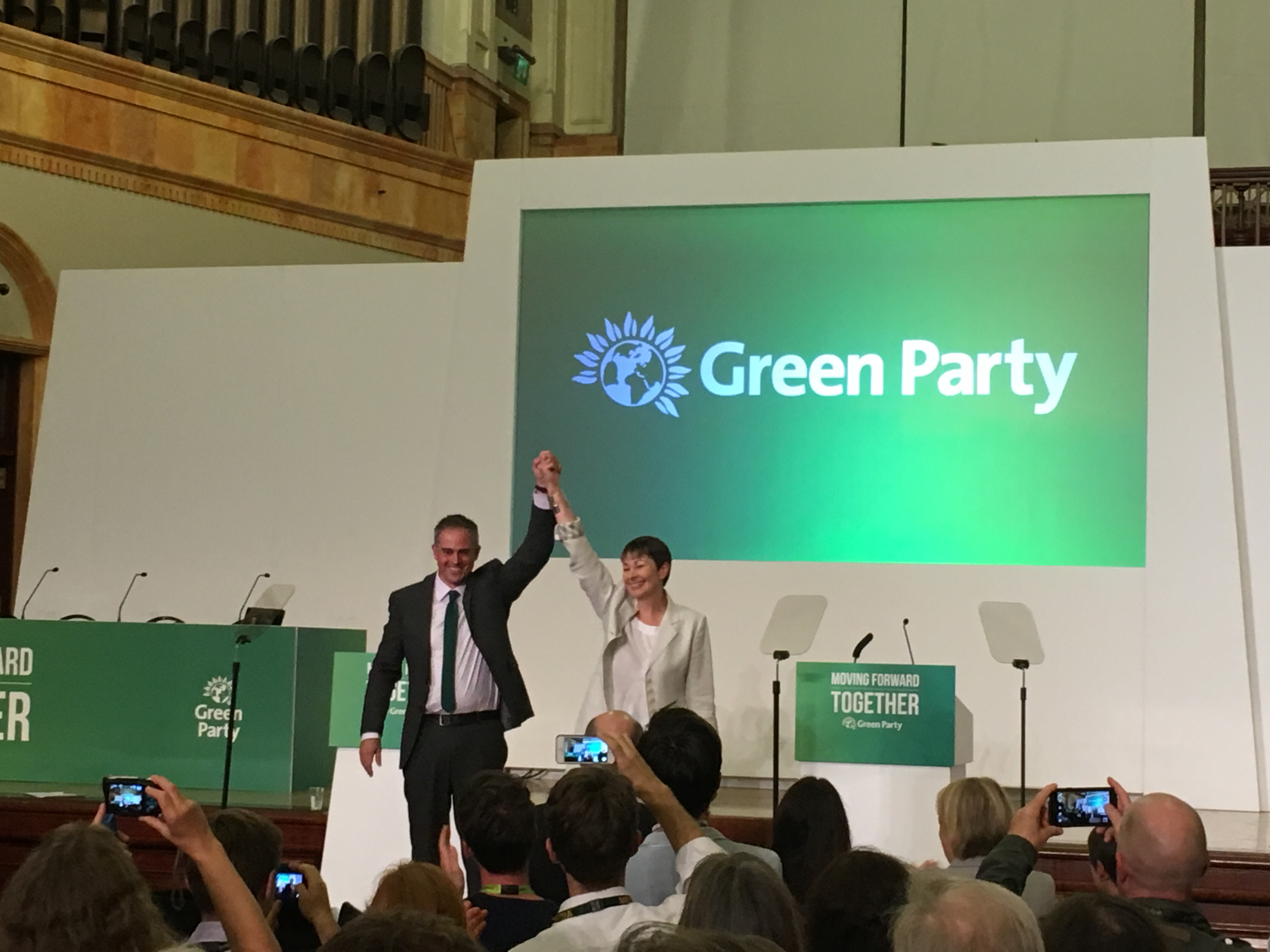 Caroline and Jonathan gave a joint speech to conference in the university’s impressive Great Hall. To laughter and applause, Jonathan pointed out that we are more united under two leaders than other parties are under one! Caroline voiced the anger we all feel at the shameful exploitation of the refugee crisis by Ukip and others in the Leave campaign in the run-up to the EU referendum. The new leaders confirmed that the Greens will push for a second referendum on the terms of any deal to leave the EU.

In a packed schedule, Southwark delegates were briefed on the development of organisational plans for the national party; learnt about updating and improving our policymaking in the digital age; brushed up on local campaigning skills with expert advice from Cllrs Chris Williams and James Burn of Solihull Green Party (two of 10 Greens on Solihull Council); attended the launch of the new Security, Peace and Defence policy working group; took part in workshops on animal welfare issues in the food industry; and listened to debates on the future of the progressive alliance and the way ahead post-Brexit.

The main business of conference is, of course, to shape policy – and in the Green Party, rank-and-file members have a much greater say than in other Westminster parties. In lively but respectfully debated plenary sessions, we voted – for example – to give unions right of access to workplaces; to strengthen support for unpaid carers; to back the bill to reform the House of Lords (introduced by the Green Party peer Jenny Jones); to oppose the Government’s Prevent strategy; and to end external educational testing for under-14s.

On Saturday night we were entertained by stand-up comedians and poets from the West Midlands; tested our general knowledge in the Big Green Quiz; or watched Daniel Vallin’s powerful documentary on food waste and social isolation, Full Bins, Empty Bellies, Lonely Lives.

Above all, conference offered the chance to meet Greens from across the party structure (I stood next to MEP Molly Scott Cato in the breakfast queue!), and from across the country. There are so many hard-working activists campaigning against disastrous government policies, from fracking in Lancashire, to the badger cull in the South-west. They’re an inspiration, and make us proud to be members of the Green Party.