Bartley Shaw welcomed members and our guest the London Field Officer Elfrede Brambley-Crawshaw. The meeting was quorate and commenced at 18:44.

The minutes of the last AGM were unanimously approved.

Bartley and Susan outlined the work over the past year, highlighting the success at the London Assembly Election and ongoing campaigning in the target ward for the 2022 local elections.

Officers had met regularly and Bartley thanked all officers for their diligent work during the year and in particular Andy Denis who had stood down as Treasurer in early summer and to Phil Vabulas who had recently stood down as Election Agent.

Most activity has been on-line with 20 hosted meetings including member meetings, book club, and campaigning meetings. There has been 50 in-person campaign events.

The London Assembly elections were a success regionally, with an addition assembly place gained, and locally with second place being achieved in the Lambeth and Southwark district. Candidates, local organisers and volunteers were thanked for the many rounds of leafletting that contributed to this success.

Hustings for the target ward, Nunhead and Queens Road, resulted in three excellent candidates Claire Sheppard, Catherine Dawkins and Peter Baffo. Peter unfortunately had had to withdraw and Richard Taylor has stepped up to replace him.  Leafletting and door knocking has taken place most weekends with four of the five polling districts now covered and 570 surveys returned.

There was an appeal for 60 candidates to stand in the other wards. Whilst it is unlikely that any of these would be elected it is important that there is a full slate of Green Party candidates for the electorate to vote for.

Susan has stood down as Co-Chair and will be focusing on co-ordinating the local election campaign.

Philip gave a brief summary of his report, attached. Income and expenditure for the 12 months to 31 October were £8,275 and £4,676 respectively leading to a surplus of £3,599 and funds of £9,768. This puts the party in a healthy position for May’s local election campaign, supporting our councillors when elected and identifying a new target ward.

Meg reported that her aim as membership officer in the last year had been to engage with and encourage engagement between members. This had been difficult and most meetings had been remote due to lockdown safety issues or bad weather. Three book club events had taken place and been reasonably well attended. The campaigning events mentioned above had been a good way of engaging members. Current membership stands at around 600 and she called each new member to welcome them and encourage involvement.

Meg asked for volunteers and ideas for new member events.

Toby explained the aims and objectives of his work as data officer, employing a 9 box grid with likelihood of voting on one axis and likelihood of voting green on the other. He explained how the grid is used to identify voters for engagement, canvassing, and getting out the vote. The sources of this information are the marked electoral register and the returned surveys.

Posts were unanimously elected as follows:

Volunteers are sought for the vacant posts and co-options will be made as necessary.

The following officers were authorised as signatories for the bank account to approve and make payments:

The formal part of the meeting closed at 19:44

Bartley  introduced Elfrede Brambley-Crawshaw who is one of the London Field Officers and a Green Party councillor on Suffolk County Council. She gave a very inspiring talk about how the Target to Win approach after nine years of having just one Green Party councillor had within six years increased numbers to become the official opposition party.

Elfrede explained how Green party councillors can influence and be effective by punching above their weight and by being the Green in the room. She gave the example of the latter in how she had influenced the SCC decision to declare a climate emergency by being the only councillor to regularly attend the meetings working with council officers.

She explained what may change after we get our first councillors elected in Southwark. There will be case work.  Door knocking will still be important but leafleting could reduce to quarterly. Support for Councillors would be required on projects and providing briefings on committee papers would be particularly productive.

Income and expenditure for the 12 months to 31 October were £8,275 and £4,676 respectively leading to a surplus of £3,599 and funds of £9,768. This puts the party in a healthy position for May’s local election campaign, supporting our councillors when elected and identifying a new target ward. 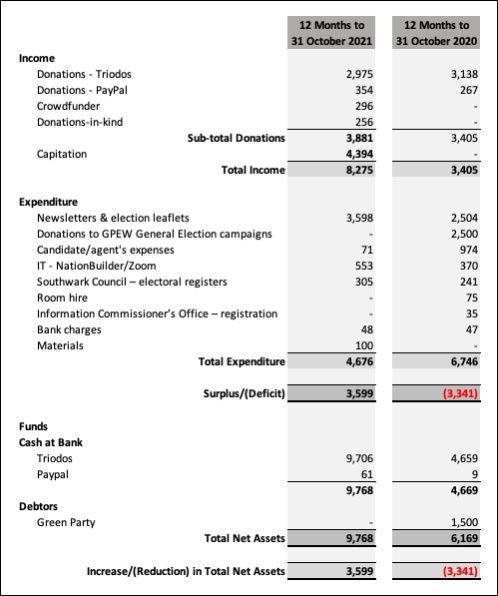 Donations were higher than last year due to the Crowdfunder for election expenses and donations-in-kind – where officers have not claimed expenditure spent on party business. The capitation received this year was for 2019.

Expenditure is lower than last year, mainly due a £2,500 donation to 2019 General Election campaigns elsewhere in the country. Expenditure on newsletters and election leaflets was higher due to the London Assembly Elections and forthcoming local council elections. IT costs have gone up due to the Zoom licence for remote meetings during lockdown. Last year’s room hire was for the 2019 AGM. The Information Commissioners registration is due to be paid shortly.

Funds are held in a Triodos bank account with some donations received via PayPal. All payments are made electronically and authorised by any two of the three signatories - Treasurer and co-Chairs.

Expenditure on newsletters and election leaflets will increase in the run up to the May elections. Frequency of newsletters will decrease thereafter, but there will be a need to maintain a profile in the Nunhead and Queens Road Ward and in any new target ward. Newly elected councillors will need support in carrying out their duties which will put a focus on increasing fundraising.